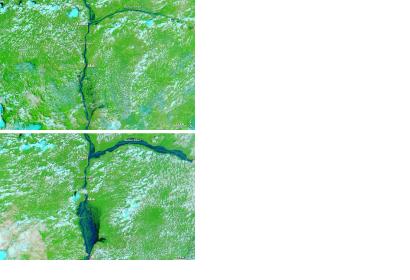 Nigeria continues to be heavily affected by floods. The country’s National Emergency Management Agency reported that floods had killed 431 people and displaced 1.3 million more. Floods had also wiped out 152,575 hectares (377,020 acres) of farmland, and Nigerians could expect rapidly rising food prices as a result. On 25 September 2012, the International Charter "Space and Major Disasters" was activated to produce maps of the flooding of the Niger and Benue River close to the city of Lokoja.

The Moderate Resolution Imaging Spectroradiometer (MODIS) on NASA's Aqua satellites captured an image of the confluence of the Niger and Benue Rivers in southern Nigeria on October 11, 2012. The comparison to an images acquired October 8, 2010 shows the extent of the floods. Both images use a combination of visible and infrared light to better distinguish between water and land. Water varies from electric blue to navy, vegetation is bright green, and clouds range in color from nearly white to pale blue-green.

The contrast between the images is stark. In October 2012, flood water swamped areas that had been dry two years earlier. The Benue River was markedly swollen east of Lokoja, and flood water fanned out over a large area south of Idah.

News reports described major rivers such as the Niger bursting their banks, and severe flooding in the Niger Delta. Although flash floods frequently occur during the rainy season from May to September, news sources described the 2012 floods as the worst in more than 40 years. Floods even damaged the homestead of Nigerian president Goodluck Jonathan, who declared the event a “national disaster” while visiting a relief camp outside Lokoja.