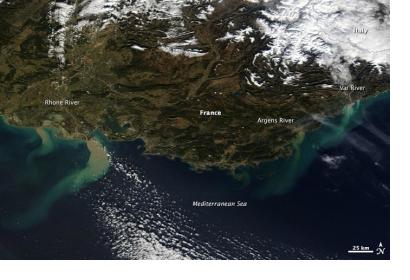 Heavy rainfall caused flooding in southeastern France and northern Italy. On the images taken by the MODIS sensor on NASA’s Terra satellite, the mud-laden runoff is clearly visible creating tan and green plumes of sediment in the Mediterranean.

The floods caused two deaths and forced widespread evacuation. BBC reported on the situation in France: “By Sunday evening, 155 people had been airlifted from the worst-hit areas and the evacuation of residents by boat was continuing.” In Italy, the regions around Bologna, Genoa and Florence experienced widespread flooding, with the city of Modena, in the Emilia-Romagna region, particularly affected.