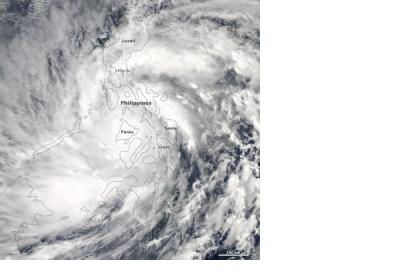 The Moderate Resolution Imaging Spectroradiometer (MODIS) on NASA’s Aqua satellite acquired am image of Super Typhoon Haiyan over the Philippines on 8 November 2013. The image was acquired at 2:10 p.m. local time (5:10 UTC), when winds were estimated to be 270 km/h (165 mph). On 7 November, NASA had already captured the storm from Space before it made landfall.