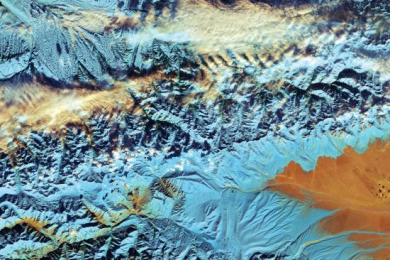 During the testing period of several months, the two satellites provided data on natural resources, environmental monitoring, and natural disasters. According to project managers, the designers of the Gaofen series verified the reliability of the satellites’ equipment concluding that they are prepared for their official start. Both satellites are expected to operate in a sun-synchronous orbit for at least eight years.

Launched on 9 May 2018, Gaofen-5 is the first satellite developed by Chinese researchers and experts to monitor air pollution by examining air pollutants, greenhouse gases and aerosols. Gaofen-5 weighs 2.7 tons and carries six instruments, two for land observation and four for air monitoring. The satellite was designed and constructed by the Shanghai Academy of Spaceflight Technology and is used mainly by the Ministry of Ecology and Environment, the Ministry of Natural Resources and China Meteorological Administration.

Gaofen-6 was launched one month after Gaofen-5 and provides high-resolution images of the Earth. The satellite was developed and built by the China Academy of Space Technology (CAST) in Beijing. According to the academy, Gaofen-6 is China's first satellite capable of performing high-precision agricultural monitoring. The data will support China’s disaster management as it will be used to monitor disasters, estimate crop yields as well as complete surveys of wetland and forest resources. CAST has worked in all of those fields with Gaofen-1, the first one of the satellite fleet launched in April 2013.

China launched the Gaofen project in May 2010 and claimed it to be one of 16 nationally important projects in science and technology. The project’s goal is to form a space-based, high-resolution Earth observation network by 2020.