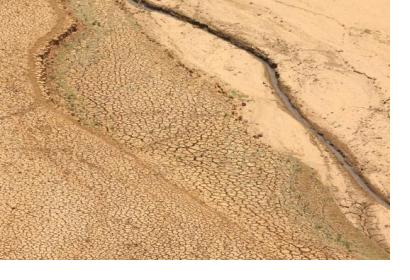 The ongoing drought in Sri Lanka, believed to be the worst in 40 years, began towards the end of 2016 and the beginning of 2017 with abnormally low soil moisture in Northern Sri Lanka and India’s Tamil Nadu state. At the beginning of this month, the number of people affected by the drought exceeded two million.

Drought is not a novel phenomenon in Sril Lanka, but what makes the current episode unique is its intensity, severity and persistence, similar to the drought episodes in 2012 and 2014. Kurunegala District in the North Western Province is one of the areas that has experienced devastating effects of drought ranging from reduction of water supplies for crop irrigation to nearly empty reservoirs, with significant impacts on livelihoods. The effects of the drought have also undermined the country’s rice- based food system.

Relevant and current data on soil moisture and vegetation conditions can support authorities in identifying drought and implementing mitigation measures to address its impacts in time.

In an effort to provide such information on a regional basis, the International Water Management Institute(IWMI) and the CGIAR Research Program on Climate Change, Agriculture and Food Security (CCAFS) developed the South Asia Drought Monitoring Systems (SADMS) in 2014. The system consists of a wide range of drought indices such as the Standardized Precipitation Index and the Soil Moisture Index. Through a dedicated website, IWMI provides access to drought severity maps and other resources based on space-derived information.

IWMI, in partnership with the Vienna University of Technology in Austria and the Research Institute for Geo–Hydrological Protection in Italy, have recently expanded the existing toolkit with another index. The Soil Water Anomaly Drought Index (SWADI) involves the use of radar backscatter measurements from the Advanced Scatterometer (ASCAT) aboard the EUMETSAT MetOp satellite.

Besides creating new indices, researchers are also looking into integrating existing indices to improve drought early warning. To support local authorities in taking measures to prevent crop failures and production loses, they are integrating soil moisture measurements with the Normalized Difference Vegetation Index (NDVI), which predicts the condition of vegetation with a lead-time of 30 days.

IWMI and the Indian Council of Agriculture Research (ICAR) are testing the South Asia Early Warning System (SADEWS) with state officials working on monitoring drought. The system will encompass the recently created SWADI, a 15-day drought forecast and the Integrated Drought Severity Index (IDSI), which uses satellite data to assess the impacts of drought on agriculture every 8 days.

The new tools are expected to support authorities in South Asia in identifying and addressing drought swiftly.

UN-SPIDER and the Disaster Management Center (DMC) of Sri Lanka conducted a training workshop earlier this year in Colombo to support efforts conducted by the organization in the area of drought early warning.

IWMI is one of 21 UN-SPIDER Regional Support Offices.