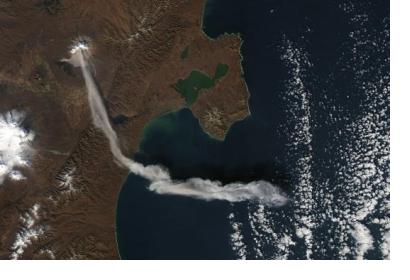 Significant activity from volcanoes in the Russian Federation have been observed from space in recent months. The Kamchatka and Kuril Islands volcanoes, located in the fact east of the country, are being monitored by satellites in order to avert the hazards caused by their regular eruptions to air travel and to local populations. These volcanoes are among the most active in the world, generally erupting between three and seven times every year. As of 4 May 2018, two volcanoes in Kamchatka - Karymysky and Sheveluch - are [subject](http://www.kscnet.ru/ivs/kvert/index_eng.php) to an orange [aviation colour code](http://www.wovo.org/aviation-colour-codes.html) meaning that a volcano is exhibiting heightened unrest with increased likelihood of eruption or that a volcanic eruption is underway with no or minor ash emission. The Ebeko volcano located in the Kuril Islands is also subject to the same warning. When volcanoes in the region erupt, they tend to produce large ash clouds that rise to heights of up to 16 kilometres above sea level and spread thousands of kilometres from the source. These ash plumes have major implications for aviation safety as the fine ash interferes with jet engines. These ash clouds often descend on cities and towns and local populations. They cause regular damage to trees and vegetation and interfere with communications systems. An early warning of volcanic activity via satellites allows airlines to be timely notified about volcanic ash thus allowing aircraft to avoid such hazardous encounters. Such timely information can also allow national authorities to evacuate people from the affected area if necessary thus reducing the risk of disaster. Volcanoes in Kamchatka and in the Kuril islands are monitored using the VolSatView system, which uses data both from Russian and international satellites. Information is provided by Russian satellites Meteor-M, Resource-P and Canopus-B, with additional information coming from other bodies including United States of America’s National Oceanic and Atmospheric Administration (NOAA) as well as the European Space Agency’s [Sentinel satellites](https://www.esa.int/Our_Activities/Observing_the_Earth/Copernicus/Overview4); which operate as part of the European Union’s [Copernicus Earth observation programme](http://www.copernicus.eu/). ###The Kamchatkan Volcanic Eruption Response Team The [Kamchatkan Volcanic Eruption Response Team](http://www.kscnet.ru/ivs/kvert/about_eng.php) (KVERT) conducts visual, satellite, and seismic monitoring of volcanoes in Kamchatkan and the Kuril Islands. The primary [purpose](https://www.avo.alaska.edu/activity/kvert.php) of KVERT is to reduce the risk of aircraft encounters with volcanic ash clouds in the North Pacific region through timely detection of eruptive activity and prompt notification of airline authorities about volcanic ash hazards. KVERT assigns an aviation colour code (a system recommended by the [International Civil Aviation Organization](https://www.icao.int/)) for 30 active volcanoes in Kamchatka and six volcanoes in the Kuril Islands. KVERT says that due to the large increase in air-traffic during the last ten years, airplanes are now at a greater risk of encountering a volcanic ash cloud. KVERT sends information releases regarding volcanic activity in their area or responsibility to all interested services including airlines, volcanic observatories and weather services. *This article was contributed by Jack Kavanagh, UN Online Volunteer mobilized through www.onlinevolunteering.org.*
Volcanoes observed erupting from space by Russian satellites
Wed, 05/16/2018 - 10:23
Russian Federation
Volcanic Eruption