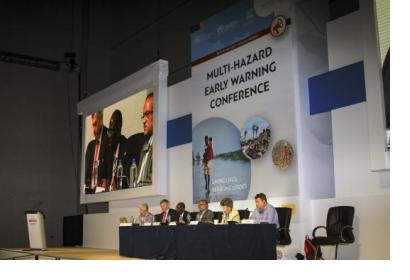 The International Network for Multi-Hazard Early Warning System (IN-MHEWS) is convening the Second Multi-Hazard Early Warning Conference (MHEWC-II) on 13 and 14 May 2019 as a pre-event to the sixth session of the Global Platform for Disaster Risk Reduction (GP2019) in Geneva. The conference aims to highlight the role of national governance in the implementation and sustainability of multi-hazard early warning systems that take into account fundamental information on all risk dimensions (hazard, exposure, vulnerability and coping/adaptive capacity), regulatory frameworks and policies, and institutional partnerships, and ensure that warnings are received, well understood and actionable.

The conference, which will take place at the Headquarters of the World Meteorological Organization (WMO), is the second of its kind after the First Multi-Hazard Early Warning Conference (MHEWC-I) in 2017 in Cancun, Mexico. UNOOSA, through its UN-SPIDER programme, is co-chairing the MHEWC-II Organizing Committee alongside WMO. It is also co-organizing a side event on big data and space technologies during the event.

Early warning is a major element of disaster risk reduction.  It  can  prevent  loss  of  life  and  reduce  the economic and material impacts of hazardous events  including disasters.  To  be  effective,  early  warning  systems  need  to  actively  involve  the  people  and  communities  at  risk  from  a  range  of  hazards, facilitate public education and awareness of risks, disseminate messages and warnings efficiently  and  ensure  that  there  is  a  constant  state  of preparedness and that early action is enabled. Despite significant progress in strengthening early warning systems across the world, many developing countries - in particular least developed countries (LDCs), small island developing states (SIDS), and landlocked developing countries (LLDCs) - are not benefiting as much as they could from early warning systems. As a result, the societal benefits of early warning systems are not spread evenly across regions, countries and communities.

A number of international and national agencies established IN-MHEWS during the Third United Nations World Conference on Disaster Risk Reduction (WCDRR) in Sendai, Japan, in 2015 to address this challenge and contribute to the achievement of Target G of the Sendai Framework for Disaster Risk Reduction 2015-2030, namely to "substantially increase the availability of and access to multi-hazard early warning systems and disaster risk information and assessments to the people by 2030".

IN-MHEWS aims to facilitate the sharing of expertise and good practice for multi-hazard early warning systems as a national strategy for disaster risk reduction, climate change adaptation and building resilience. In addition, it works to guide and advocate the implementation and/or improvement of multi-hazard early warning systems, share lessons learnt regarding early warning and increase the efficiency of investments in such systems for enhanced societal resilience.

MHEWC-II seeks to highlight and advocate for a comprehensive multi-hazard approach to early warning governance based on effective national legislation, regulatory frameworks, and institutional partnerships, while benefitting from regional and global support mechanisms; the development, access and use of the best science and new technologies for MHEWS; co-design of MHEWS tailored to the needs of the target audience; learning from good practices in early warning; and taking on an impact-based forecasting approach in early warning to enable organizations to formulate understandable and actionable messages.

The conference will also take stock of the progress made by government with integrating/synergizing single-hazard early warning systems in their country towards creating a comprehensive multi-hazard approach and implementing the Multi-Hazard Early Warning Systems Checklist published by IN-MHEWS; address the effectiveness and return on investment of MHEWS; reporting on Target G of the Sendai Framework; and engaging the private sector and civil society in operating MHEWS.

Finally, participants will aim to identify requirements and challenges for the development and implementation of MHEWS as well as opportunities and limitations for research to progress in the development of observation and monitoring systems, among others. They will also discuss how governments finance the implementation or strengthening of MHEWS and identify policy-relevant advice on incorporating MHEWS into national and local disaster risk reduction strategies.

The outcomes will need to highlight strategies and actions to build, promote and strengthen multi-hazard early warning systems, especially how to address key gaps such as faster and broader dissemination of warnings and the quality of the information provided to the "last mile", at risk communities or affected populations, through capacity development and operational support.

A first and immediate outcome of MHEWC-II will be input to a variety of sessions of GP2019, especially the working session on multi-hazard early warning systems as well as the High-level Dialogues, to be reflected in the Chair’s Summary of the GP2019 and its proceedings. A dedicated outcome document will be produced in the months following the Conference, based on its outcomes, including a set of recommendations that could be achieved by countries before the next Conference (MHEWC-III).