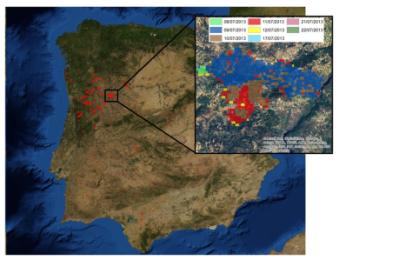 In addition, the International Charter Space and Major Disasters aims to provide a system of space data acquisition and delivery to countries and regions affected by any natural or man-made disaster, granting access to Earth Observation data on fire hazard.

During the 2013 fire season in Portugal, remotely sensed data and satellite images were extensively used to monitor and assess the evolution of the fire, trying to anticipate the risk in some regions. Once the fires were extinguished, high-resolution satellite images were used to evaluate the impact and to develop an effective approach to avoid further damage to the environment.