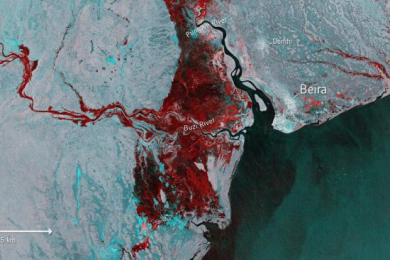 Millions of people in Mozambique, Malawi and Zimbabwe are struggling to cope with the aftermath of Cyclone Idai, which has swept through this part of southeast Africa over the last weeks, leaving devastation in its wake. It is thought that more than two million people in the three countries have been affected, but the extent of destruction is still unfolding.

The authorities and military are working  to rescue people, but roads and other transport and communication links are cut off. In order to plan and execute this kind of emergency response it is vital to understand exactly which areas have been affected, especially as accessing people cut off is extremely challenging.

The disaster triggered activations of both the Copernicus Emergency Mapping Service and the International Charter Space and Major Disasters. Both services take advantage of observations from several satellites and provide on-demand mapping to help civil protection authorities and the international humanitarian community in the face of major emergencies.

Satellites can provide indispensable up-to-date information to observe such events and to map flooded areas for response teams facing these dire situations.

For instance, Copernicus Sentinel-1 is one of the satellite missions being used to map flooded areas to help relief efforts. Sentinel-1’s radar ability to see through clouds and rain and in darkness makes it particularly useful for monitoring floods. Also, images acquired before and after flooding offer immediate information on the extent of inundation and support assessments of property and environmental damage.

Another example of satellite imagery of this hazard has been caught from the Moderate Resolution Imaging Spectroradiometer (MODIS) on NASA’s Aqua satellite that allowed NASA to capture the first relatively clear satellite view since Idai hit: a false-color image of the flooding on March 21, 2019.

NASA’s Aqua satellite captured a false-color image before and after the flooding. Image: NASA.

While the full scope of the damage remains unknown, preliminary estimates suggest that hundreds of people have been killed, thousands have been injured and hundreds of thousands displaced. Tens of thousands of homes were damaged or destroyed. According to one report, the city of Beira alone had 100,000 people stranded and in need of rescue and about three-quarters of the city’s population have lost their homes, according to news reports.

The map shows rainfall accumulation from March 13 to March 20, 2019. Many areas received as much as 50 centimeters of rain. These data are remotely-sensed estimates that come from the Integrated Multi-Satellite Retrievals (IMERG), a product of the NASA Global Precipitation Measurement (GPM) mission. Local rainfall amounts can be significantly higher when measured from the ground.

While the worst of the floodwaters have begun to subside, observers expect this catastrophe will continue to unfold for several weeks and months.

Rain continues to fall in many areas, and some places remain inaccessible because of flooding and damaged infrastructure, making it difficult for rescuers to provide help. In many areas, clean water is scarce and unsanitary conditions have increased the risk of disease. With vast tracts of wheat and other crops destroyed by floodwaters, food shortages could become a problem in the coming weeks and months.