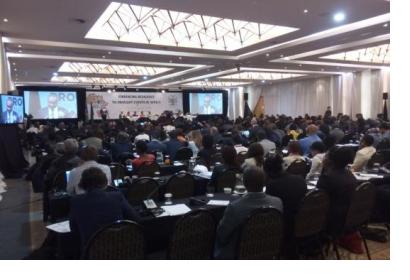 The Ministry of Environment and Tourism of Namibia, in collaboration with the United Nations Convention to Combat Desertification (UNCCD) are conducting in Windhoek, Namibia, the conference entitled “Enhancing resilience to drought events on the African Continent”.  The conference is being conducted from 15 to 19 August 2016 and was opened by the Deputy Prime Minister of Namibia, Honorable Ms. Netumbo Nandi-Ndaitwah.

The goal of the Conference is to identify the needs of African countries towards drought mitigation. It plans to create a strategic framework for African countries regarding drought events by reducing poverty, enhancing economic development and improving environmental as well as human well-being at the continental scale.  This conference stands on Namibia’s role as President of the UNCCD COP11 and follows its role the high-level meeting on national drought policies (HMNDP) which took place in Geneva in 2013.

Dr. Joachim Post of the UN-SPIDER Bonn Office is participating in the Conference representing UNOOSA. He will conduct a presentation on the recent efforts conducted by UN-SPIDER on the use of archived and up-to-date satellite imagery to generate drought indices as a way to improve national drought early warning systems.