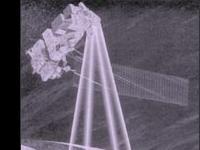 On October 5, 1993 the EOSAT-owned Landsat 6 failed at launch after not reaching the velocity necessary to obtain orbit.
The satellite did not achieve orbit because of a ruptured hydrazine manifold. The separation from the booster rocket occurred properly, however, the ruptured rocket fuel chamber prevented fuel from reaching the apogee kick motor. This failure resulted in the spacecraft tumbling instead of accumulating enough energy to reach its planned orbit.
In 1993, with Landsats 4 and 5 both beyond their design lives, the loss of Landsat 6, and a nascent Landsat 7 program, it seemed that a data gap was imminent.  Yet, Landsat-5 continued to operate until December 2012, when USGS announced that the satellite would be decommissioned.