The Sendai Framework for Disaster Risk Reduction (SFDRR) recognises the usefulness of tracking losses triggered by natural hazards over time to assess the effects that disaster risk reduction efforts put in place are having over time. The Technical Guidance for Monitoring and Reporting on Progress in Achieving the Global Targets of the Sendai Framework for Disaster Risk Reduction provided information on indicators to be used to track such losses.

Losses and impacts in the agricultural sector are considered in this Technical Guidance and include direct losses to crops and impacts in terms of the number of people who are affected by natural hazards, who are also directly engaged in agricultural activities. Economic losses have a direct impact on the gross domestic product of any country and the Technical Guidance makes reference to the assessment of agricultural crop monetary loss through indicator C2C:

How can Earth observation contribute? 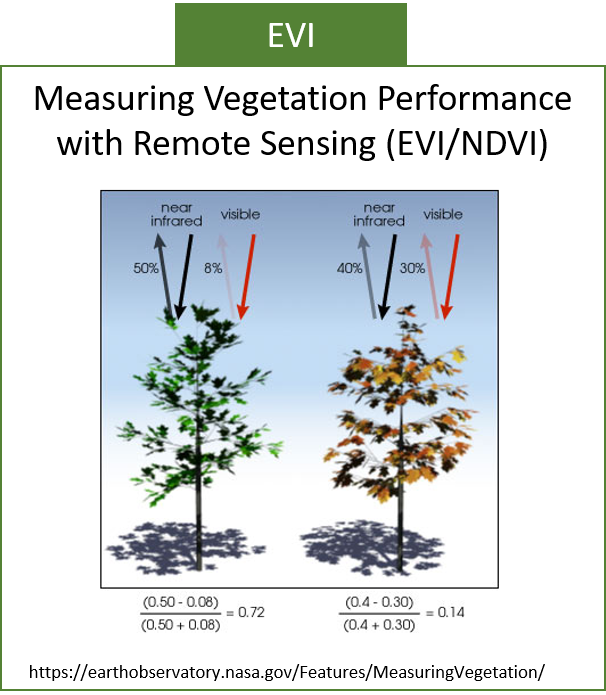 Earth observation tools can be used to track the geographical extent of droughts on annual and perennial crops using indicators such as the Normalized Difference Vegetation Index (NDVI) or the Enhanced Vegetation Index (EVI). The NDVI is extracted from typical optical satellite imagery that includes red and near infrared bands. The EVI is extracted from optical satellite imagery that my also include the blue band in addition to the red and near infrared bands. The incorporation of the use of the blue band helps manage the effects of atmospheric dust, aerosols, ground reflection below vegetation and chlorophyll saturation.

Both the NDVI and the EVI assess the effects of droughts on crops comparing the ratio of the amount of reflected light in the red and the near infrared bands of the spectrum.

To make use of these indicators to assess crop losses, ground calibrations are required for all the various types of crops to be estimated, so that the numeric values of the NDVI or the EVI are linked with the degree of specific crop losses.

The EvIDENz procedure goes one step further in the use of such vegetation indices to improve the assessment of the effects of droughts on crops. The EvIDENz procedure incorporates the use of a comparative drought index, meaning it compares the intensity of droughts on crops in a specific year with the intensity of droughts in a long time series such as the Moderate Resolution Imaging Spectroradiometer (MODIS) vegetation data products starting in the middle of the year 2000. 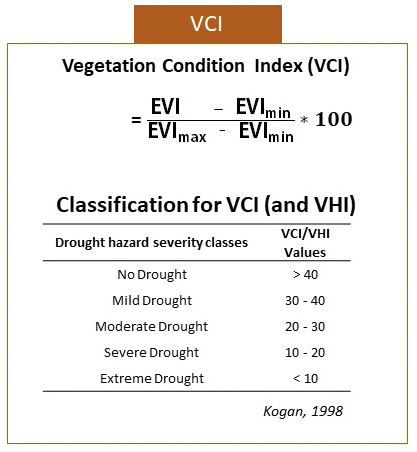 The EvIDENz procedure makes use of the Vegetation Condition Index (VCI) developed by Kogan in 1998 that compares the specific value of the EVI in a specific year with values of the EVI for all other years between 2001 and the present.

In the absence of data on crop losses over the years, Kogan developed a classification of drought severity using the value of the VCI for each region of a country or province.

A further refinement suggested by the EvIDENz project is to incorporate - for each type of crop - information on its phenology and the period of time when the drought manifested itself with respect to the phenology.

It is well known that a drought has less effects on crop yield if the drought manifests itself towards the end of the crop season, and it has major impacts during the start or the peak of the season. 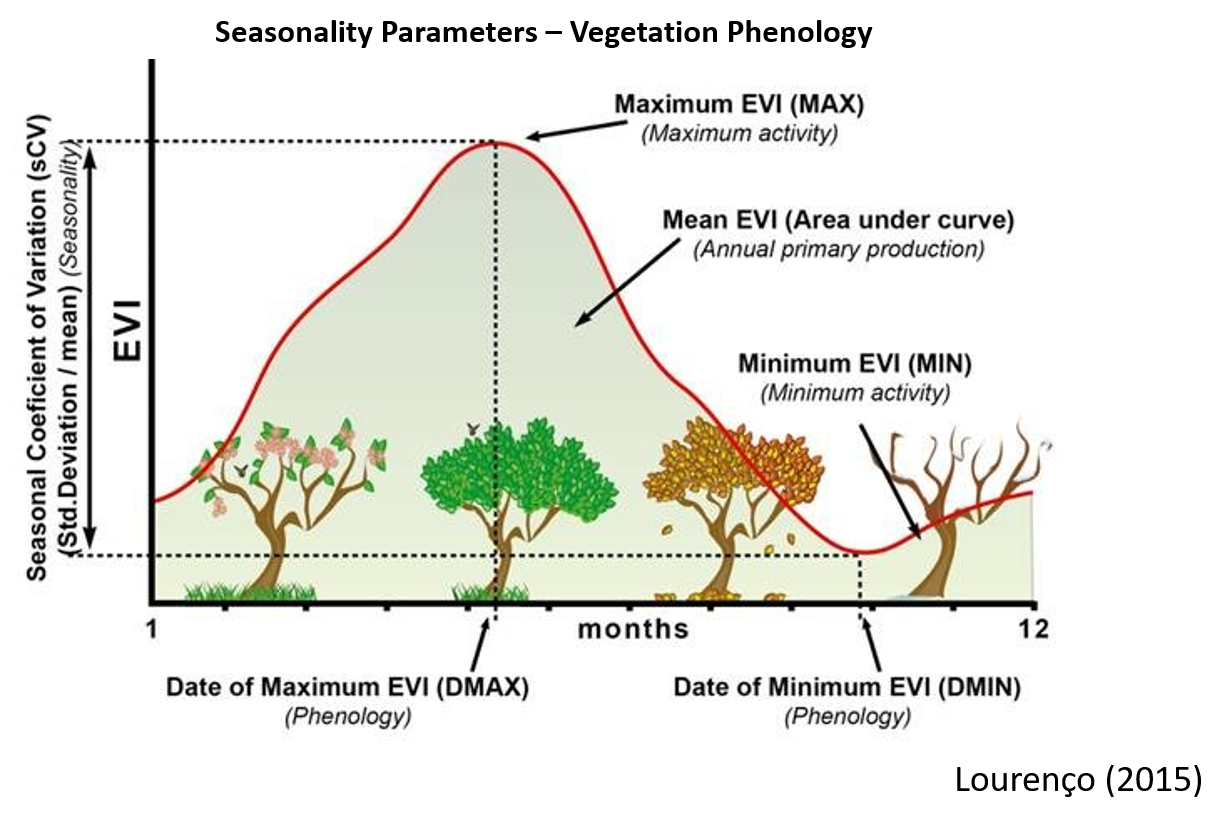 The linear combination proposed in the EvIDENz procedure is:

The weighted calculation of the VCI is then conducted as follows for each pixel:

The EviDENz procedure would include the following steps:

Constraints and critical issues to consider when using this procedure: