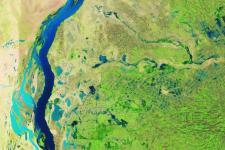 Disasters cause tremendous damage to societies around the world. They lead to loss of lives and property, displace people from their homes and destroy livelihoods, and disrupt sustainable development efforts worldwide. Developing countries are particularly susceptible to the impact of natural hazards as they are more vulnerable and exposed, and less resilient.

The 2030 Agenda for Sustainable Development, adopted by the international community in 2015 as a common plan of action for people, planet, prosperity and peace, highlights the interaction between sustainable development and disasters and calls on stakeholders to “build the resilience of the poor and those in vulnerable situations and reduce their exposure and vulnerability to climate-related extreme events and other economic, social and environmental shocks and disasters.” The Sendai Framework for Disaster Risk Reduction 2015-2030, another major international agreement adopted in 2015, also points out that the increasing frequency and intensity of disasters “significantly impedes progress towards sustainable development.” It sets seven targets and four priorities for action to prevent new and reduce existing disaster risks. The four priorities are:

Through its spatial and temporal coverage, satellite-based information provides insights about disaster risks as well as about emergency situations when disasters occur. It supports all disaster management phases – prevention, mitigation, preparedness, response, rehabilitation, reconstruction and recovery – with the aim of avoiding impacts that may jeopardize development efforts. In combination with in-situ observations and data from other sources, space-based information enables evidence-based decision making for sustainable development.

Concerned about the devastating impact of disasters and recognizing the vital role that space technologies can play in supporting the entire disaster management cycle, the United Nations General Assembly (UNGA) established the United Nations Platform for Space-based Information for Disaster Management and Emergency Response (UN-SPIDER) in 2006 as a programme to be implemented by the United Nations Office for Outer Space Affairs (UNOOSA). UN-SPIDER has the mandate to provide universal access to all countries and all relevant international and regional organizations to all types of space-based information and services relevant to disaster management to support the full disaster management cycle. Since 2007, the programme has conducted a wide range of activities to fulfil its mandate as a gateway to space-based information; as a bridge to connect the disaster management and space communities; and as a facilitator of capacity-building and institutional strengthening, in particular for developing countries.

The United Nations General Assembly, in resolution A/RES/72/77 of 14 December 2017, reiterated its concern about the devastating impact of disasters and stated its desire of enhancing international coordination and cooperation at the global level in disaster management and emergency response through greater access to and use of space-based services and geospatial information.

Space technologies are also an important element in early warning systems (EWS), which are central to effective disaster management and feature prominently in the Sendai Framework as well as in the Paris Agreement. The former calls on countries to “substantially increase the availability of and access to multi-hazard early warning systems and disaster risk information and assessments to people by 2030”; the latter asks states to strengthen their cooperation on enhancing action on adaption, including by “strengthening scientific knowledge on climate, including research, systematic observation of the climate system and early warning systems, in a manner that informs climate services and supports decision-making”.  In addition, SDG 13, which urges countries to act to combat climate change and its impacts, encourages them to “improve education, awareness-raising and human and institutional capacity on climate change mitigation, adaptation, impact reduction and early warning.” To support countries in developing and implementing multi-hazard early warning systems, UN-SPIDER participates in the International Network on Multi-Hazard Early Warning Systems (IN-MHEWS) and raises awareness about the benefits of such systems through its outreach and technical advisory activities.

While an increasing number of African countries are developing space programs, many countries on the continent do not have easy access to space-based information and knowledge about how to benefit from such data it in the context of disaster management and emergency response. For instance, the number of national organizations authorized to request the activation of the International Charter Space and Major Disasters, an international mechanism providing space-based information during disasters, is significantly lower than on any other continent.

The SPEAR project aims to understand needs, develop solutions and strengthen national capacities in using space-based information for disaster monitoring and prevention in Africa in line with international and regional frameworks.

In its 2017 African Space Policy, the African Union (AU) outlines that space represents a unique opportunity for cooperation in using and sharing enabling infrastructure and data towards the proactive management of responses to natural hazards and disasters, amongst other fields. The document recognizes the significant role that space-based information systems play in risk reduction and disaster management on the African continent and shows that the AU has a high interest in improving and implementing space-related activities, such as Earth observation, satellite communication and navigation, to be able to independently conduct such activities in the future.

By strengthening their capacities to use space-based technologies for all phases of the disaster management cycle, the SPEAR project will also support African states in implementing international agreements such as the Sendai Framework and Paris Agreement.

The project encompasses different research and development activities to strengthen and test the applicability of remote sensing technologies for disaster monitoring and risk reduction in support of national disaster risk management. Through collaboration between the Center for Remote Sensing of Land Surfaces (ZFL) of the University of Bonn and UN-SPIDER, direct exchange in disaster management and preparedness through integration of space-based methods and technologies is facilitated.

In the framework of the international conventions and initiatives mentioned above, the integration of national needs is of high relevance. Different data and technologies on various temporal and spatial scales build the key determinant for comprehensive assessment before, during and after a disaster. The monitoring of the full cycle of disaster management using Earth observation (EO) plays an important role for the distribution and training of information for disaster risk reduction. Figure 1 visualizes the project approach comprised of four major pillars. Assessment of national needs and requirements of international conventions guides the research and development components of the project. Combines with the availability of different datasets, information products and methods, this leads to EO-based solutions for national needs and the further development of the UN-SPIDER Knowledge Portal for providing user friendly access to products, tools and information as well as web -based knowledge and capacity building materials that build the baseline for a learning environment targeting the strengthening of national capacities.

Thus, the following objectives can be defined for the project:

In order to achieve these aims, the project will intensively cooperate with UN-SPIDER Regional Support Offices, Regional Space Science and Technology Education Centres affiliated to the United Nations and reliable partners in the study areas in the fields of scientific method development, data use and assessment, involvement of national mandated organizations, knowledge management, capacity building and institutional strengthening.