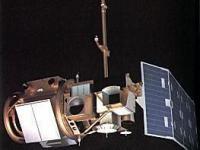 Landsat 4 was launched on July 16, 1982. The Landsat 4 spacecraft was significantly different than that of the previous Landsats, and Landsat 4 did not carry the RBV instrument.
In addition to the Multispectral Scanner System (MSS) instrument, Landsat 4 (and Landsat 5) carried a sensor with improved spectral and spatial resolution, i.e., the new satellites could see a wider (and more scientifically-tailored) portion of the electromagnetic spectrum and could see the ground in greater detail. This new instrument was known as the Thematic Mapper (TM).
Landsat 4 was kept in orbit for housekeeping telemetry command and tracking data (which it downlinked via a separate data path, the S-band) until it was decommissioned in 2001.
While Landsat 4 was built and launched by NASA, NOAA initially oversaw the operations of the satellite. Landsat 4 operations were contracted out to the Earth Observation Satellite Company (EOSAT) corporation in 1984.
By 1998, the management of the Landsat 4 (and Landsat 5) operations contract was transferred from NOAA to the USGS; operations were continued by the private sector until mid-2001 when Space Imaging (formerly EOSAT) returned the operations contract to the U.S. Government.
Despite the numerous transfers of satellite operation, the USGS has remained responsible for long-term preservation of Landsat data in its National Satellite Land Remote Sensing Data Archive (NSLRSDA) in Sioux Falls, South Dakota.