NASA researchers assess the connection between wildfires and drought in Africa 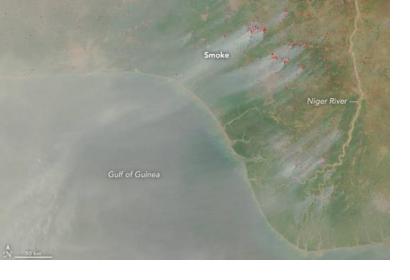 Researchers at NASA’s Goddard Space Flight Center in Greenbelt, Maryland, United States, have been investigating the connection between wild fires and droughts in sub-Saharan Africa using satellite data from NASA’s NASA’s Moderate Resolution Imaging Spectroradiometer and the Tropical Rainfall Measurement Mission. A comparative analysis of soil moisture, precipitation, evapotranspiration and vegetation greenness; and the examination of the interaction of clouds and smoke led researchers to identify that extreme burning during the dry season decreases soil moisture, evaporation and vegetation greenness, which in turn decrease the amount of rainfall in the following season.  The reduction in rainfall can also be attributed to the conversion of forests and wetlands intro croplands, as such a conversion reduces the capacity of the soil to store moisture; which is turned into moisture in the atmosphere that is eventually transformed into rain.