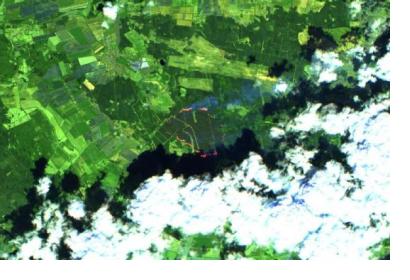 Satellite technology became an integral part of efforts to detect and contain forest fires in Mecklenburg Western Pomerania, Germany at the end of June and early July. The German Aerospace Center (DLR) used satellite information, along with images captured by the Modular Aerial Camera System (MACS), to create maps, which provided emergency services with up-to-date information about areas affected by the fires.

When tracking the fires near Lübtheen, for example, the DLR Center for Satellite-Based Crisis Information (ZKI) used a freely available Sentinel-2 image, in which false-colour data offered valuable information about the status of the fires. Additionally, ZKI made use of data acquired by the Visible Infrared Imaging Radiometer Suite (VIIRS) and the Moderate Resolution Imaging Spectroradiometer (MODIS) to determine the locations of the fires.

In a recent press release, DLR outlines the role of the ZKI in collecting and disseminating important information when severe weather events arise. The DLR states, “... the ZKI collects all available satellite and airborne information, prepares and analyses the data and adds essential geoinformation obtained from the German Federal Office of Cartography and Geodesy (BKG) in order to produce dedicated, easily understandable and comprehensive situation image products for the area concerned. Due to the large number of ZKI users, the generated products can be distributed directly to the relevant interested parties. The ZKI is currently in close contact with the German Federal Agency for Technical Relief (THW) and the Joint Reporting and Situation Centre (GMLZ), as well as with the local operations management, to whom it immediately forwards its maps and some of the raw data.”

Moreover, the maps and products created by the ZKI are free and available for public download from the ZKI activations page. Through its efforts, DLR assisted emergency responders in mitigating the effects of the June/July 2019 forest fires in Mecklenburg-Western Pomerania, considered to be the worst in the region’s history. The Copernicus Emergency Management Mapping Service was also activated, which provided emergency teams with satellite Earth observation information to determine the impact of the fires and the areas most affected.