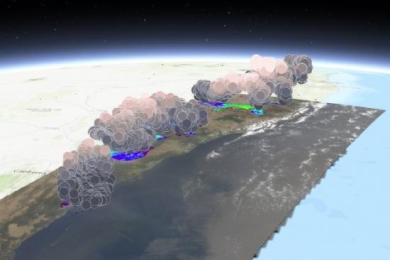 When analysing wildfires and their impacts, remote sensing instruments provide frequent, broad coverage at minimal incremental cost and at no risk, compared with traditional in situ monitoring. Over the past 20 years, the research community has developed tools and techniques to capture key aspects of fire behavior and impacts, with data from spaceborne instruments such as the Multiangle Imaging Spectroradiometer (MISR).

The NASA Disasters Program, in cooperation with the Active Aerosol Plume-height (AAP) project, has developed the first-ever interactive 3D map of MISR fire plume-height data, which demonstrates the height of smoke plumes emanating from the Australian fires. The 3D data was captured by NASA’s Terra satellite which flew over the eastern coast of Australia on 16 December 2019. The map shows that in some areas smoke plumes reached heights of more than four kilometers at the time of the satellite overpass.

MISR technology can detect the height of smoke plume above Earth’s surface by viewing plumes from several pre-selected angles and zoom in on specific areas. By using nine cameras that image Earth from different perspectives, MISR observes the apparent shift (called parallax) of smoke plumes from the fires and helps determine their height.

The 3D data from the Terra satellite can greatly improve the work of disaster management agencies and researchers by providing information about the location and intensity of fires in the region and by predicting where the smoke will go and what regions may be affected downwind. The data can also be used to initialize air-quality and chemical transport models.

NASA is now working with the Australian Bureau of Meteorology (BOM) to improve air quality forecasts for the fires, and the NASA Disasters Program is studying the risks and the short and long-term impacts from the fires associated with air quality, aviation, wildlife and ecosystems, and climate dynamics.

Other satellite instruments can be used to monitor wildfires globally.

Concerning fire detection and fire front mapping, the MODIS instruments, as well as the National Oceanic and Atmospheric Administration’s (NOAA) Visible Infrared Imaging Radiometer Suite (VIIRS) and NOAA-20 satellites, all obtain twice-daily, near-global measurements used to determine Fire Radiative Power (FRP), with a fire pixel resolution of up to about 0.5–1 kilometer at nadir (directly below the satellite). The Advanced Baseline Imagers on NOAA’s Geostationary Operational Environmental Satellite (GOES)-16 and GOES-17 platforms perform fire detection much more frequently but at a lower resolution of no better than 2 kilometers at nadir.

FRP can also be used to detect smoke source strength, by dividing the plume aerosol optical depth (AOD; a measure of atmospheric opacity caused by aerosols, also derived from MODIS) by the age of a plume, as derived from the plume’s horizontal extent in MODIS imagery and advection speed from a reanalysis model, to obtain a factor related to the smoke emission rate. The relationship between this factor and the FRP, evaluated over multiple cases, provides an ecosystem-specific emission coefficient that when multiplied by the FRP for an individual fire, yields an estimated source strength.

To analyse the downwind evolution of smoke plumes, scientists map aerosol plumes during transport using imagery from broad-swath, single-view imagers such as MODIS, VIIRS, the Atmospheric Infrared Sounder aboard Aqua Satellite, the Measurement of Pollution in the Troposphere sensor aboard Terra Satellite and the space-based lidar aboard the Cloud-Aerosol Lidar and Infrared Pathfinder Satellite Observation (CALIPSO) satellite.