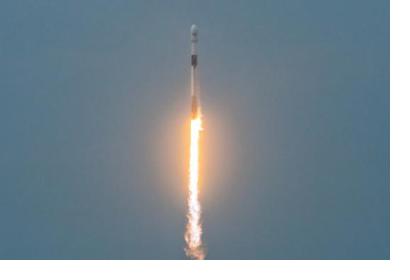 The Argentinean SAOCOM 1B satellite [was successfully launched](https://www.argentina.gob.ar/noticias/argentina-lanzo-el-satelite-saocom-1b-y-completo-la-mision-espacial-mas-importante-del-pais) into orbit on 30 August 2020. Developed by the National Argentinean Space Commission (CONAE), this new satellite will join SAOCOM 1A and four Italian COSMO-SkyMed to complete the joint Italian-Argentinean Satellite System for Emergency Management (SIASGE). Like its predecessor, SAOCOM 1B was built in Argentina through a joint effort with private companies and universities. It will operate at an elevation of 620 kilometers above the surface of the Earth. A SpaceX Falcon 9 booster launched the satellite from Space Launch Complex 40 at Cape Canaveral Air Force Station in Florida, United States of America. The SAOCOM 1B satellite has been fitted with a Synthetic Aperture Radar (SAR) sensor that makes use of microwaves in the electromagnetic L-band, which goes through clouds and works without sunlight. The spatial resolution of its imagery will range between 10 and 100 meters. As a result, data obtained by the satellite will contribute to monitoring soil moisture for agricultural and hydrological use, which will also support refining vegetation indices. In addition, SAOCOM 1B is expected to help monitor floods, detect mass movements, determine available water in snow for irrigation, and study glacier displacement, among other use cases related to hydrologic, coastal and oceanographic activities. SAOCOM, which stands for “Satélite Argentino de Observación COn Microondas” (Argentinean Microwaves Observation Satellite), is a two-satellite programme. The SAOCOM 1A satellite [was launched](/news-and-events/news/conae-launches-new-saocom-1-satellite-effective-earth-observation-and-disaster) in October 2018. Space-derived products, such as soil moisture maps, are available through the [CONAE GeoPortal](https://geoportal.conae.gov.ar/geoexplorer/composer/).
Argentina lanzó el satélite SAOCOM [in Spanish]1B y completó la misión espacial…
Mon, 09/14/2020 - 11:22
Argentina
Forest Fire
Glacial Lake Outburst
Drought
Landslide
Flood
Argentina Regional Support Office