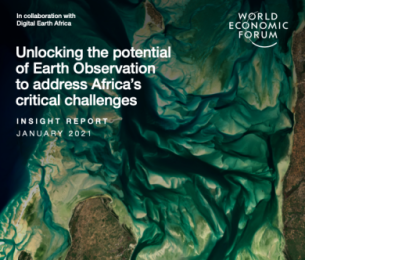 A new report outlines the economic potential of Earth observation (EO) data for the African continent. The report "Unlocking the potential of Earth observation to address Africa’s critical challenges”, published by the World Economic Forum (WEF) in collaboration with Digital Earth Africa (DE Africa) on January 15, explores the prospective financial impact of DE Africa on the African economy.

The report predicts that the impact of DE Africa, a platform that prepares satellite data and imagery of the African continent in a decision-ready format for governments and industry, could surpass $2 billion per year by 2024. It mentions three key areas that will benefit from the information provided by DE Africa: the EO industry, the agricultural sector and the mining industry.

The EO industry in Africa is growing quickly. The report notes that if this trend continues, the integration of DE Africa could facilitate the growth of the industry by $500 million per year from 2024 onwards. The report attributes this growth to EO data from DE Africa which would lead to an improved EO data infrastructure and a reformed policy environment on the continent.

The agricultural sector is vital for many economies in Africa. Unfortunately, the sector lacks productivity and accurate information on water accessibility and crop progress is scarce. The report indicates that by supplying EO data, DE Africa could increase agricultural productivity tremendously and generate up to $1 billion per year by 2024. The report mentions that the EO data gathered by DE Africa could increase agricultural productivity by saving water, boosting crop yields, decreasing insurance costs and lowering pesticide usage.

Unregulated mining has caused extensive economic and environmental damage to the continent. The report notes that by providing EO data, DE Africa could improve the governance of mines, which would save the industry at least $900 million per year by 2024. The report states that EO data gathered by DE Africa could better regulate mining by identifying and preventing unregulated mining, thereby increasing tax profits and protecting natural resources.

The report concludes that while the economic potential of DE Africa's EO data is sizable, it demonstrates only part of a larger "transformative impact" that openly accessible EO data could have on the continent. In order to bring about this development, the report calls for intensified cooperation between industry and government.