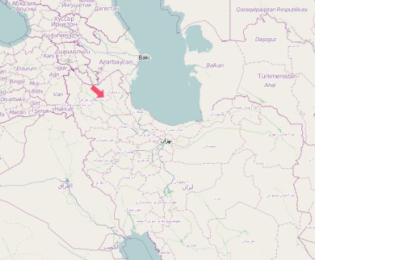 UNOOSA/UN-SPIDER has activated the International Charter: Space and Major Disaster to provide satellite imagery for the two strong earthquakes that occurred in Iran on 11 August 2012. This international mechanism was activated on behalf of the Iranian Space Agency, host of UN-SPIDER's Regional Support Office in Iran. The German Aerospace Center (DLR) is the project manager for this activation.

The two strong earthquakes in north-west Iran had been followed by multiple aftershocks. 300 people were killed, more than 3000 victims had been injured and 16,000 people were left homeless. The quakes measured on Richter scales of 6.4 and 6.3, damaging rural villages in Ahar, Varzgahan and Harees, in the city of Tabriz. Some 20 villages in mountainous areas had been completely destroyed whilst hundreds had been damaged.

Search and rescue operations came to a close on Sunday, 12 August, since most residents had been accounted for. Officials confirm that residents of affected areas are small and sparsely populated. However, aid and shelter is being provided for the homeless staying in make-shift camps. Iran’s Red Crescent has provided a Sport’s stadium with 6,000 tents, distributing tonnes of food, water and medical supplies to thousands of victims. Hospitals remain overwhelmed, and are struggling to cope with the number of casualties after the quakes.