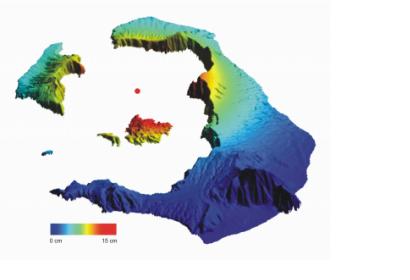 Over the past year and a half, parts of the Greek Santorini islands have risen by 14 cm. Scientists believe that new molten rock has been squeezing up beneath a volcano accumulating in a magma chamber at a depth of about 4 km. Satellite data confirm that the islands have risen as much as 14 cm since January 2011. The Santorini volcano’s last major explosive eruption was about 3600 years ago. In a study published this week in Nature Geoscience, the team discovered that the whole island group has been inflating – slowly rising and moving outward – almost systematically.

To map the movement, the scientists used radar data from ESA’s Envisat satellite from March to December 2011 and from the German TerraSAR-X mission from July 2011 to April 2012. To ensure accurate measurement, the team also used GPS receivers and an island-wide network of triangulation stations. The study outlines that the total amount of vertical movement is now approaching 8–14 cm at some points, and the whole caldera is around 14 cm wider now than it was at the beginning of 2011. The islands grow, on average, by about a million cubic metres per year.

The satellite data show that the amount of molten rock that has arrived beneath Santorini over the 12-month period is the equivalent of 10–20 years’ growth of the volcano. The scientists stressed that the recent movement doesn’t indicate that an eruption is about to happen. In fact, the rate of earthquake activity has dropped off in the past few months.