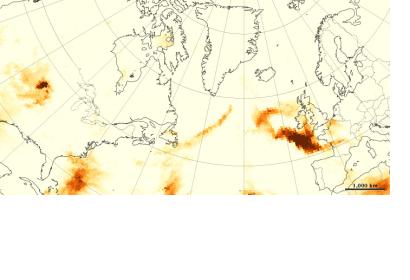 Satellite observations suggest fires in Quebec sent smoke billowing across the Atlantic; but pinpointing the source can pose a scientific challenge, as NASA points out in a recent web article.

On June 23, 2013, OMPS detected a plume dense with smoky aerosols over the North Atlantic Ocean, east of Newfoundland. The plume blew east on the 24th and reached France by June 25. While wildfires in Colorado may have contributed to the plume, a trajectory analysis by Alain Malo, a meteorologist from the Meteorological Service of Canada, suggests that much of the smoke actually came from Quebec.