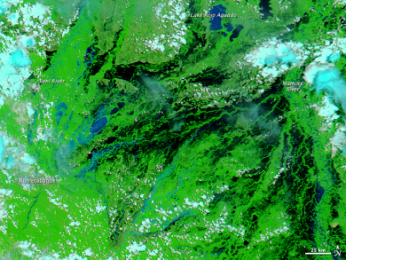 The International Charter: Space and Major Disasters was activated on 21 March 2014 to provide satellite image products in support of the response efforts for floods in the northern regions of Brazil. The mechanism was triggered by the Brazilian Disaster and Risk Management National Centre (CENAD).

The International Charter reported: "Heavy rain in the northern regions of Brazil have resulted in flooding along the Madeira River since February 2014. Thousands of people have been evacuated, and the flooding is gradually growing worse as the water levels rise. A state of emergency was declared in February and 22,000 homes have been evacuated in the area. Many villages along the river were flooded and roads inundated by the flood waters. It is estimated that the affected areas stretch from Porto Velho to Mutum-Parana. No casualties have been reported and this has been attributed to the quick evacuation of the area."