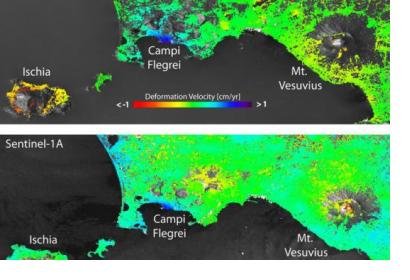 The remote sensing technique to map ground deformation is being improved thanks to scientific work based on frequent observations from the Sentinel-1A radar satellite data.

The one-year old satellite data has been compared with those from the ERS and Envisat, former satellite radar missions. This work has enabled researchers of Italy’s Institute for Electromagnetic Sensing of the Environment (IREA-CNR) to show a drastic improvement in mapping surface deformation and to draw a new path for earthquake and volcano monitoring.

“To achieve this, the scientists used the Interferometric Synthetic Aperture Radar, or InSAR, technique. This involves combining two or more radar images acquired at different times. If something on the ground has changed between the acquisitions, the terrain deformation is displayed as a continuous sequence of coloured stripes called interference fringes, or an ‘interferogram’,” explains the European Space Agency on their website.

The mean deformation velocity maps generated from Sentinel-1A data over Italy’s Bay of Naples are a good example of the increased spatial coverage from surface deformation maps. In this area where are located three main volcanic complexes, Mount Vesuvius, the Phlegraean Fields and Ischia island, the Sentinel-1A maps clearly show the volcano’s ‘spreading effect’ at the summit of Mount Vesuvius, which was only partially visible with previous products from ERS and Envisat.

The quality of the interferometric products and monitoring of land deformation will be further improved with the expected launch of Sentinel-1B, sister satellite of Sentinel 1A.