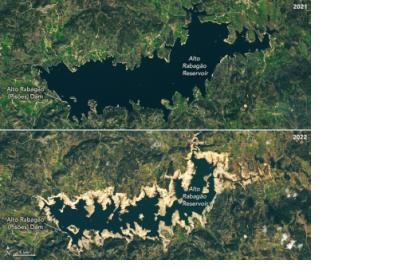 On the Iberian Peninsula Portal and Spain are facing a severe drought, that started in November 2021 and worsened in the following months. Officials in Portugal were forced to limit the use of hydroelectric dams for power production and irrigation, as some reservoirs started reaching significant lows.

The extreme dimension of this event gets revealed on a pair of Landsat 8 OLI (Operational Land Imager) images, operated by NASA and USGS, comparing the state of the Alto Rabagão and Alto Lindoso reservoirs in northern Portugal from March 2021 to February 2022.

NASA 's earth observatory published a story on this topic as “Image of the Day” on 16 February 2022.