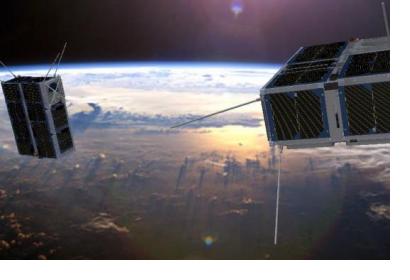 The European Space Agency (ESA) has announced the launch of a new satellite that will use artificial intelligence to filter images unsuitable for future use. The Phi Satellite (ɸ-Sat-1), presented at the ESA Phi-week from 9 to 12 September, will make data delivery more efficient by not sending back to Earth acquisitions with high cloud cover. Currently, the process of filtering images for cloud cover is done after the images are received on the ground, meaning that a number of images sent to Earth are not useful.

In 2017, the federated satellite system 6U tandem mission for sea ice and soil moisture monitoring (FSSCat) idea, which was proposed by the Universitat Politecnica de Catalunya from Barcelona, Spain, won the Copernicus Masters. This annual international competition awards prizes to innovative solutions, developments and ideas for business and society based on Earth observation data. The idea of the FSSCat is to launch two federated 6U CubeSats satellites in support of the Copernicus Land and Marine Environment services. These two CubeSats are very small and contain instruments that measure soil moisture, ice extent, and ice thickness as well as an instrument to detect melting ponds over ice. The project aims to enable cost-effective methods of Earth observation, as a precursor mission for future satellites offering high temporal resolution and moderate spatial resolution with improved revisit time.

The data offered by ɸ-Sat-1 contributes to the universal monitoring capacities of, among other things, disaster related topics: Especially the soil moisture monitoring component can prove useful as this is not included in the current Sentinel portfolio. Combined with the first AI instrument to be launched into orbit, ɸ-Sat-1 is an innovative step towards improved Earth observation satellite missions.

Current Sentinel missions have already enabled a variety of monitoring capabilities for disaster risk reduction and emergency response. Sentinel-1 was the first mission to be launched under the Copernicus programme. Its radar imaging tools provide users with Digital Elevation Models (DEMs) which are particularly useful for flood hazard mapping as is done in this UN-SPIDER Recommended Practice. Sentinel-2, which was launched in 2015, collects land cover images. In disaster management these images are useful for a variety of disasters ranging from burn severity mapping to drought monitoring, as is dealt with in this and this UN-SPIDER Recommended Practices respectively. The launch of ɸ-Sat-1 is a promising addition to the capabilities of disaster management.