Study discusses use of space technology for detecting infrastructure instability 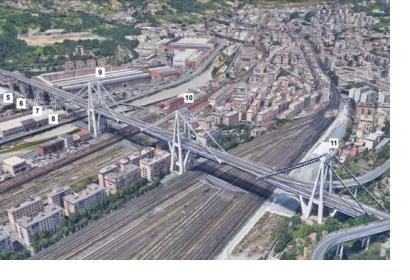 Evaluating the safety and integrity of infrastructure such as bridges, which is often done through hands-on inspections, may soon be possible with the help of information captured several kilometers above the Earth’s surface. According to a National Aeronautics and Space Administration (NASA) news article, scientists from NASA, the University of Bath, and the Italian Space Agency used historical synthetic aperture radar (SAR) satellite imagery to study the condition of the Morandi Bridge near Genoa, Italy, in the 15 years prior to its August 2018 collapse, which claimed the lives of dozens.

Evaluating satellite data using the techniques of SAR multi-temporal interferometric analysis (MT-InSAR) and Markov Chain Monte Carlo (MCMC) three-dimensional inversion, the scientists were able to uncover small changes in the bridge’s structure which could signal deterioration. The data, captured by several different satellites, including from the Italian constellation COSMO-Skymed and the European constellation Sentinel 1A/B, allowed for an analysis of relative displacement, or changes to the bridge’s structure. According to NASA, “[The scientists] found that the deck next to the bridge's collapsed pier showed subtle signs of change as early as 2015; they also noted that several parts of the bridge showed a more significant increase in structural changes between March 2017 and August 2018 - a hidden indication that at least part of the bridge may have become structurally unsound.”

While using SAR data to detect changes in infrastructure stability could offer great benefit to infrastructure managers, it is only possible in geographic areas that have consistent SAR coverage. A satellite designed by NASA and the Indian Space Research Organization (ISRO) called NISAR, which is scheduled to be launched in 2022, aims to expand SAR monitoring capabilities, which in turn could make this type of infrastructure analysis more widely available. “Designed to enable scientists to observe and measure global environmental changes and hazards, NISAR will collect imagery that will enable engineers and scientists to investigate the stability of structures like bridges nearly anywhere in the world about every week,” according to NASA.

While not a panacea for detecting all structural safety issues, the hope is that evaluations of SAR infrastructure data, using the techniques and ones similar to those used in the Morandi Bridge study, can contribute to a better overall understanding of infrastructure instability. And ideally, the techniques could be used to identify issues early on, before they result in losses of human life and economic damage.