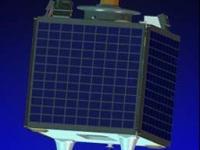 On 26 September 2003 Nigeria launched its $13 million national satellite NigeriaSat-1 in Plesetsk, Russia under a seven-nation constellation being handled by a Russian firm, Cosmos. Nigeriasat-1 is a low earth orbit micro satellite for disaster monitoring looking spacecraft, 5-year target design life-span orbit 700km. The launching of the National Satellite, which started development in November 2001, had been postponed from July 2003 because the Russian Space Agency had to launch a military satellite during that period. NigeriaSat-1 is one of five satellites which will make up a network called the Disaster Monitoring Constellation. The other partners in the international consortium are UK, China, Algeria, Turkey, Thailand and Vietnam. Each satellite belongs to one country, but they will share information with each other when disaster monitoring is needed. The Disaster Monitoring Constellation satellites, which cost less than $10 million each, are built by a British-based company, Surrey Satellite Technology, which has also trained technicians from Nigeria and some of the other countries involved. The processed images from the DMC will be distributed to relief teams by the Reuters AlterNet Foundation. The Reuters Foundation launched AlertNet in 1997 to help the work of relief professionals around the world.

NigeriaSat-1 carries an imaging payload that provides satellite images of 32m resolution with a swath width of 600km using push-broom scanning in three spectral bands (red, green and NIR) and 3-5 days revisit and a daily revisit when in constellation with four other satellites.