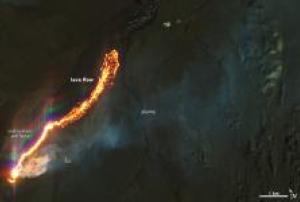 Bardabunga volcano in Iceland has started erupting in August 2014 accompanied by swarms of earthquakes in the near area. Tremors have continued ever since with up to 500 per day. NASA and other satellites have been monitoring the developments from space.

On 20 September, the Advanced Land Imager (ALI) on NASA's EO-1 satellite has captured yet another shot of the Holuhraun lava field. On the infrared image, hot lava is depicted in orange-red.

Researchers at the German Aerospace Center (DLR) have developed a satellite-based prediction tool for volcanic ash distribution. It generates detailed images of areas with both heavy and light ash loads.

"The eruption of the Icelandic volcanoes Eyjafjallajökull in 2010 and Grimsvötn in 2011 demonstrated the vulnerability of the air traffic system in the event of volcanic eruptions and exposed gaps in the observation systems for volcanic ash," says Markus Rapp, director of the DLR Institute of Atmospheric Physics. "Because of this, we decided to develop a process to precisely track ash clouds using satellites that are already in space."

DLR reported: "A prototype of the new procedure for satellite-based volcanic ash detection (VADUGS - Volcanic Ash Detection Utilizing Geostationary Satellites) is ready for its first deployment in the event of an ash cloud resulting from the Bardarbunga volcano eruption." 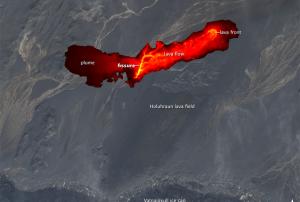 Early this week, NASA satellites were first able to capture infrared images from space of the active Bardarbunga volcano in Iceland. Up until now, "satellite imagery has been scarce because of persistent cloud cover and a relatively small number of spacecraft that collect images at high latitudes," as NASA reported.

NASA elaborated: "Overnight on September 1, the Advanced Land Imager (ALI) on NASA’s Earth Observing-1 (EO-1) satellite captured the first high-resolution view of the scene. The image is a composite of a natural-color observation from August 27 overlaid with an infrared (IR) night view from September 1. The night view combines shortwave IR, near IR, and red wavelengths (bands 9-7-5) to tease out the hottest areas within the vent and lava field. The image shows at least a 1-kilometer fissure and lava flowing in channels. The front of the flow has been moving mostly to the northeast in recent days.

To date, the Bardarbunga eruption has produced lava flows... 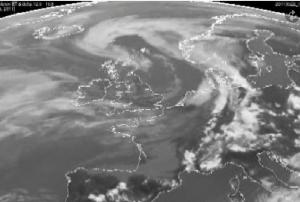 Predicting the exact dispersal of a volcanic ash cloud is never going to be easy. However, satellite data are showing that the eruption from Iceland's Grímsvötn volcano this week was unlikely to have posed a significant threat to airspace over central Europe.
The Icelandic Met Office reports that eruption from Grímsvötn has subsided and that there is now virtually no ash being produced from the volcano.This major eruption began during the evening of 21 May and led to the disruption of around a thousand flights across Europe. Although this is minor compared to the chaos caused last year when Eyjafjallajoekull erupted, satellite data are showing that this week's eruption did not pose a serious threat to aircraft flying over central Europe. Satellite measurements offer an excellent means with which to follow the spread, extension, concentration and movement of volcanic plumes.

The most useful information is provided by satellites in geostationary orbit, such as the... 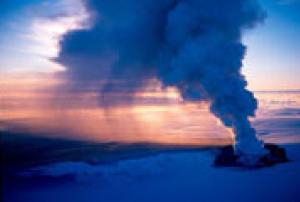 24 May 2011 – Members of a United Nations network of volcanic ash advisory centres around the world are monitoring a volcano in Iceland that has erupted and spewed ash high into the air, disrupting airline travel over parts of Europe.
The Grímsvötn volcano in south-eastern Iceland, which began erupting on Saturday, has ejected ash to a height of at least 10 kilometres, according to Clare Nullis, a spokesperson for the UN World Meteorological Organization (WMO).

Nine volcanic ash advisory centres – set up by WMO, the UN International Civil Aviation Organization (ICAO) and the International Union of Geodesy and Geophysics – are providing meteorological information as part of a global volcano watch system, she said.

The lead centre for this eruption is based in the United Kingdom, and is responsible for monitoring and reporting the spread of ash over the UK, Iceland and the north-eastern part of the Atlantic Ocean. 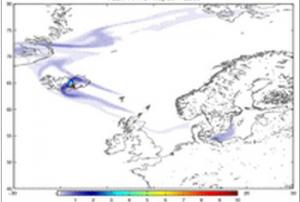 Iceland's Grímsvötn volcano spews ash high into the atmosphere, satellite observations are providing essential information to advisory centres assessing the possible hazards to aviation.
The Grímsvötn volcano in southeast Iceland, which had been dormant since 2004, started erupting in the evening of 21 May. As a consequence, the country's airspace has been closed.
Memories are still fresh of the chaos caused by the Eyjafjallajoekull eruption just over a year ago. European air traffic suffered major disruption, with hundreds of flights grounded owing to safety concerns about the ash cloud.

Although the Grímsvötn eruption is larger, it is unlikely to cause the same degree of disruption because the ash plume is being injected much higher into the atmosphere.
Ground-based radar measurements in Iceland indicate that the ash reached heights of 12–17 km and is initially moving towards northern Scandinavia.

As an expert in the remote sensing of volcanic...