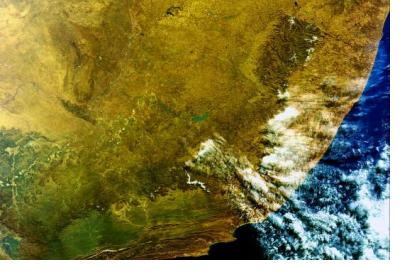 The United Nations Office for Outer Space Affairs, through its UN-SPIDER programme, has activated the International Charter "Space and Major Disasters" on behalf of the National Disaster Management Centre (NDC) of South Africa for the recent floods and mudslides in the country. The German Aerospace Centre (DLR) is acting as project manager for this activation.

Heavy rainfall has been affecting eastern South Africa over the past few days, causing floods and landslides in Durban and the surrounding KwaZulu-Natal province. According to media reports, around 70 people have been killed and some 1,000 displaced. Buildings were severely damaged as flood waters washed through areas at high speed, closing two universities, schools and wider business districts. A church in KwaZulu-Natal collapsed killing the 13 people inside.

Coastal areas in the southern and eastern part of the country are still expecting more flooding and strong winds. Residents of low lying areas have been asked to move to higher ground while a sever weather warning remains in place for the coming days in easter and south-eastern areas of the country.

Search and rescue operations are ongoing and focused on looking for more survivors under the rubble of collapsed buildings.
International Charter activation page for flood in South Africa
Fri, 04/26/2019 - 11:28
Africa
South Africa
Flood