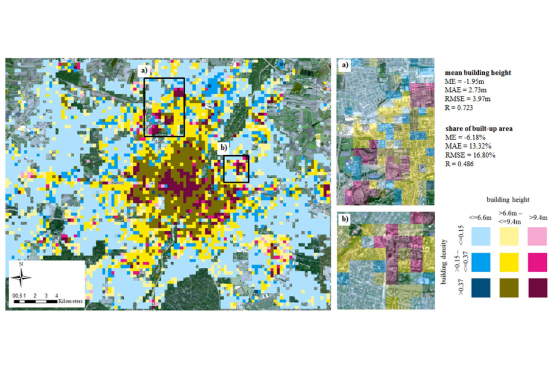 To support exposure modelling by providing large-area information about the physical morphology of urban environments, a fully automated processing chain based on imagery of the satellite mission Sentinel-2, operated by the European Space Agency (ESA) in the frame of the European Union Copernicus Programme, and of the German satellite mission TanDEM-X is being  developed for applications in disaster risk reduction worldwide.

Recent earth observation missions feature a notable tradeoff between a fairly high spatial resolution and large-area coverage. In particular, the TanDEM-X mission is a spaceborne radar interferometer which delivers a global digital surface model with an unprecedented pixel spacing of 0.4 arc seconds (~12m). In addition, ESA’s recently launched Sentinel-2 satellites provide multispectral imagery with a spatial resolution of 10m for the bands covering visible light and near-infrared and a repetition rate with the current constellation of two satellites of about 5 days. The developed workflow comprises three main modules. The first module relies on the so-called Global Urban Footprint, which provides binary information on “built-up” and “non built-up” areas. The second module comprises the derivation of height information of objects in urban environments from the digital surface model generated by the TanDEM-X mission. The third module contains the computation of the features that are used for characterization of the urban morphology using Sentinel-2 imagery. The final output comprises built-up heights and share of built-up areas of urban environments.

Derivation of built-up heights and built-up densities, which can serve as key proxies for exposure patterns.

This initiative aims at quantitatively characterizing urban environments without the incorporation of prior knowledge and a priori determination of thematic classes according to specific semantics. This is done to allow for consistent and automated large-area analysis. Moreover, this way, local peculiarities are bypassed, and a more objective statistical description of settlements is provided. Such a quantitative characterization can be transferred into thematic classes a posteriori and allows also for a targeted collection of in situ knowledge for specific applications in exposure mapping.