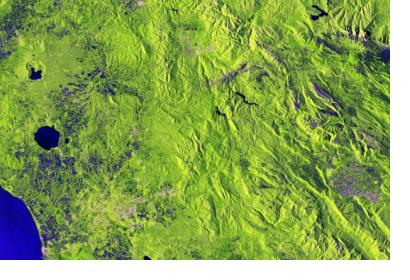 A new project seeks to evaluate how satellite remote sensing and Copernicus satellite data can support reporting related to the Sendai Framework for Disaster Risk Reduction 2015-2030 (SFDRR). Cop4Sen will be implemented by the German National Coordination for the Copernicus Emergency Management Service (Copernicus EMS) under the auspice of the Federal Office of Civil Protection and Disaster Assistance (BKK) and in cooperation with the the National Contact Office for the Sendai Framework at BKK.

With the aim to support the national evaluation of the Sendai indicators, Cop4Sen assesses the potential of remote sensing and Copernicus data and services. Cop4Sen systematically analyzes the current state of science and technology, develops and enhances methods. On a long-term basis, the results of the project will support the National Contact Office for the Sendai Framework at BKK with consistent methods and, possibly, Sendai monitoring data.

One example of remote sensing and Copernicus data supporting the implementation of Sendai Indicators is the EviDENz Project, short for “Earth Observation Based Information Products for Drought Risk Reduction at the National level”. EviDENz develops and demonstrates new Earth- observation-based methods according to SFDRR’s requirements for drought risk, using South Africa and Ukraine as case study countries. At the national level, drought hazard monitoring is performed by different sensors of Sentinel satellites.

In 2015, the United Nations adopted the SDFRR to reduce the consequences of disasters and to create a better understanding of disaster risk. Germany committed to achieve the seven global targets of the Sendai Framework. Thirty-eight indicators were established to measure the progress and results of the national disaster risk interventions. The framework encourages an increased use of Earth observation technologies for disaster risk reduction.

Due to the thematic variety of the Sendai indicators, the partners involved in the new project expect that remote sensing and Cop4Sen will contribute to the different methods and data for Sendai Framework monitoring.