Increased Volcanic Activity in Guatemala in 2021: Fuego and Pacaya 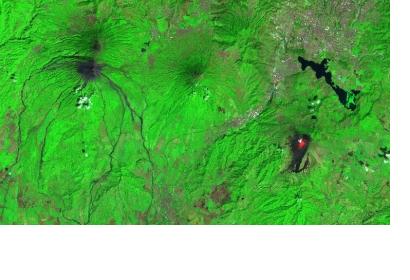 In Guatemala there are two volcanoes which have been more active recently: Fuego and Pacaya. These volcanoes pose a prominent threat to the lives of the inhabitants of the highly populated surrounding areas. This threat is evidenced by the 2018 eruption of Fuego, which caused the deaths of nearly 200 people, and the recent activity of Pacaya volcano since the beginning of the year, that has impacted communities located in its foothills, and which forced authorities to close Guatemala's international airport in Guatemala City due to ash fall from its activity.

The two volcanoes were effusive and explosive in early February 2021, according to reports by the Smithsonian Institute Global Volcanism Program and the National Institute of Seismology, Meteorology and Hydrology (INSIVUMEH) of Guatemala. This has resulted in volcanic ash and gas being hurled into the atmosphere, of which fine volcanic ash produced by the volcanoes, which then fell onto numerous surrounding communities.

The Central American Coordination Center for Disaster Prevention (CEPREDENAC) has called for advisory support with the recent volcanic eruptions. In response, the NASA Earth Applied Sciences Disasters Program has activated their risk reduction efforts and has been in close cooperation with local stakeholders such as INSIVUMEH.

Earth observation data is effective in monitoring the volcanic threat, particularly in observing the surface and temperature changes of the volcanoes, as well as in tracking the Pacaya volcano’s lava flow.  At the end of March 2021, one of these lava flows began to approach the El Patrocinio village, located on the foothills of the active cone of the volcano.

The ROSES A.37 project entitled “Day-Night Monitoring of Volcanic SO2 and Ash for Aviation Avoidance” has provided satellite observations of sulfur dioxide (SO2) from the OMPS and TROPOMI instruments, in addition to resources such as the MOUNTS Project, which monitors volcanic activity through data from several satellites and artificial intelligence. The Advanced Spaceborne Thermal Emission and Reflection Radiometer (ASTER) instrument of NASA’s Terra satellite also records thermal anomalies.

Short-wave infrared data from the European Space Agency (ESA) Sentinel-2 satellite has allowed researchers from Penn State University (funded by NASA’s Earth Surface and Interior Program) to monitor the evolution of the lava flow on Pacaya. With data from the ESA Sentinel-1 Interferometric Synthetic Aperture Radar (InSAR), they have been able to also survey the long-term progress of the surface deformation of this volcano.

According to a combination of observations from InSAR, shortwave, and thermal infrared satellite instruments, and as identified by Sentinel-1 InSAR, the position of lava flows likely caused, until February 4, the ground deformation on the southwest part of Pacaya, with no apparent sign of a broader edifice-scale deformation, despite the heightened thermal activity near the summit.

In a complementary fashion, the Executive Secretariat of Guatemala's National Coordinating Agency for Disaster Risk Reduction (SE-CONRED) has been monitoring the lava flows using drones and mapping the expansion of these lava flows using GIS applications. SE/CONRED also approached UN-SPIDER for advisory support.  UN-SPIDER mobilized the support of CONAE of Argentina in its role as one of the UN-SPIDER Regional Support Offices.  CONAE donated high resolution radar imagery from its new SAOCOM satellite to contribute to monitor the lava flows.