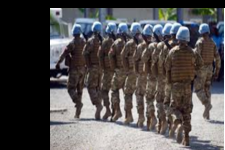 In May 2009 the United Nations announced the appointment of former United States President Bill Clinton as the Secretary-General’s Special Envoy for Haiti. In August, Dr. Paul Farmer was appointed as Deputy Special Envoy for Haiti. Both Mr. Clinton and Dr. Farmer have a direct reporting line to the Secretary-General and are on a $1 a year contract. In this role, both work with the Government and people of Haiti as they lead recovery and reconstruction efforts. They help coordinate the work of UN agencies and other international partners in Haiti, including government donors, private investors, and non-governmental organizations; and the also liaise closely with senior UN officials, including the Special Representative of the Secretary-General in Haiti, to ensure coherence of the United Nations system. The Special Envoy for Haiti also continues to advocate for the international community to realize and sustain their commitments to Haiti for long-term recovery, and help channel assistance effectively to communities in need.